Posted on May 19, 2015 Categories: Front Page, News & Media Coverage Comments are off for this post 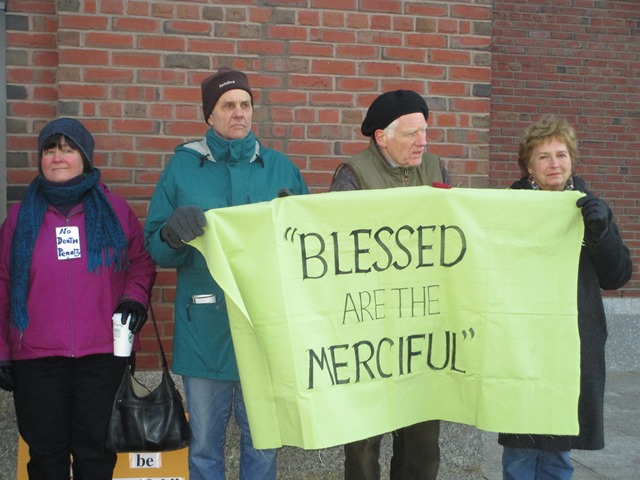 The jury in the Boston Marathon Bombing trial begins deliberating Dzhokhar Tsarnaev ‘s fate the the next day or two.

Meanwhile, anti-death penalty activists are using petitions to the court, demonstrations, calls to the Cardinal and a nun named Helen Prejean to try to sway juror’s views.

Testimony in the penalty phase ended Monday in dramatic fashion when Prejean, made famous by the movie “Dead Man Walking” said that the defendant, Dzhokhar Tsarnaev, expressed regret for his crimes.

Prosecutors had filed a motion to prevent Prejean from testifying.   Judge George O’Toole allowed her testimony to proceed, but limited it to her specific interactions with the defendant.  And If prosecutors were concerned that Prejean’s testimony might prove effective than their fears seemed prescient, according to some legal observers like Daniel Medwed of Northeastern University Law School.

In a surprise revelation,  Prejean told the court that she had met with Tsarnaev in prison on five different occasions since March.  She said she had read up on the Quran before meeting the defendant and gained his trust.  In a confident and steady voice accented by a Louisiana-Southern drawl, Prejean said Tsarnaev acknowledged  his victims:    “He said emphatically, no one deserves to suffer like they did.”  It was the first such admission by the defendant.  It was the very first expression of remorse.   Outside the courtroom anti-death penalty advocates cheered Prejean’s courtroom appearance and said it coincided with other actions.  “We had 45 people here,” said Suzanne Beloit Shanley standing by the courthouse with her husband Brayton.

The protest was organized by the Agape Community, a lay Catholic residential group.  Beloit Shanley says they also represent Christians from various faiths.

“We delivered 400 signatures to the judge, to the defense attorneys and to the prosecutors that we have been collecting for over the last two months and that Cardinal O’Malley knows about, and a large number of them are women religious nuns and priests and lay communities and Quakers. “

Beloit-Shanley says she hopes that Judge O’Toole might act on his own to vacate a death sentence if it comes to that and hopes the petitions might sway his view:

“They were hand delivered to the clerks office, who assured us that the judge would receive them and it is our statement of faith based opposition to the death penalty.”

The question of life in prison or death by lethal injection will soon be in the hands of the jury.

Anti-death penalty activists say they plan to be in front of the Moakley Courthouse each day the jury deliberates in the hope that they might impact one among the 12.   And one is all that is needed.