Posted on March 12, 2015 Categories: Peacemaking & Nonviolence Comments are off for this post 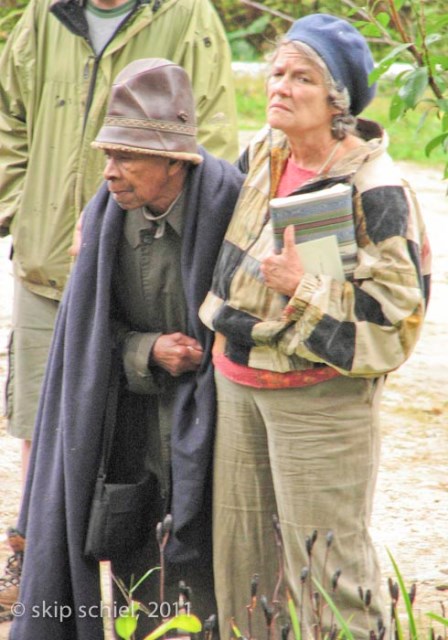 Suzanne Belote Shanley and Juanita at Agape 2012, planting a tree for Wally Nelson and all Tax Resisters.

She walked the walk, living simply and sustainably and dreamed up the idea for the Greenfield Free Harvest Supper, which has drawn hundreds each year to eat together downtown in Court Square. She died Monday at age 91.

From Wikipedia, the free encyclopedia –  (Redirected from Juanita Nelson)

She co-founded the group Peacemakers in 1948. She was the author of A Matter of Freedom and Other Writings (1988).

She worked on desegregation campaigns in Cincinnati, Washington D.C. and elsewhere and was an organizer for the Congress of Racial Equality. In 1943[2] she participated in some of the earliest sit-ins of the American Civil Rights Movement, while a journalist and student at Howard University.

By her own account, at the age of sixteen (1939) she and her mother boarded a train in Cleveland, Ohio and were sent to the “colored” cars to the rear. Incensed by the deplorable conditions of the coach, young Juanita fumed for a while then decided to move to the “white” coaches toward the front. These coaches had comfortable seats, no trash and foul smells, and were well kept. “I sat there a while and when nothing happened, I decided to move forward to the next car. I sat a while in each of the white cars moving to the front of the train to show them that I was as good as any passenger. No one said anything until a black conductor said that he was concerned about what might happen to me, that I might get hurt or something. I went on until I had sat in all of the white cars and then went back to my mother in the colored coach. I didn’t do anything, nothing had changed, but I felt a lot better about myself.”

In 1948 Juanita began her lifelong relationship with Wally Nelson, whom she met when she interviewed him in jail while she was working as a journalist. Wally was the first Field Secretary for the Congress of Racial Equality(CORE). With Wally, Juanita planned and participated in the first ‘Freedom Rides’ in the late 1940s, leading to the Southern Freedom Movement, also known as the Civil Rights Movement. Together they began engaging in war tax resistance. “When we became tax resisters in 1948,” they wrote, “it included not filing, not answering notices to supply information and making sure we had something to refuse.”

One account says: “In 1959 Juanita became the first woman in modern times to be apprehended for war tax refusal. She made her court appearance in the bathrobe she was wearing when apprehended at her home.” Juanita was released the same day, and the government never did collect the money they claimed she owed them.[3][4]

Over time, the Nelsons came to adopt the income-reduction method of war tax resistance. “Living on a reduced income is related to our refusal only as a progression of awareness, that our entire economic life is tied into violence. It seemed logical that the less we participated, the less we’d be giving to that system.”

Their critique of the economic system included a condemnation ofusury — at one point, Juanita convinced the Pioneer Valley War Tax Resisters that interest payments were ethically insupportable. She then went into the bank that held the organization’s small account “to ask that we not be credited with interest [and to] return the interest we had previously collected.” The bank, after considerable puzzlement, eventually gave in to the request.

The Nelsons cut their expenses dramatically — building a house with salvaged materials and without electricity or plumbing, and growing the majority of their own food on a half-acre (2,000 m²) of land. Eventually they came to live on less than $5,000 per year. As they aged, they wrote, “we may soon face some difficult decisions… We have no insurance. In latter years we’ve had our share of medical problems. Hospitalizations are covered by aid to the indigent. We talk with doctors before they take us on. Mostly they don’t charge; sometimes we agree on something up to twenty percent of the fee. Our greatest insurance has been the outpouring of support from many, many younger friends (and some older ones).”

Wally and Juanita Nelson spent a few months at the Koinonia Farmin 1957 and continued to work with that project for the next decade.[1]

For their role as farmers, civil rights activists, pacifists, war tax resisters, their love & generosity and their spirited life of service to the movements of social justice, activist nonviolence and peace, Juanita Nelson and her husband, Wally Nelson received the Courage of Conscience Award from The Peace Abbey in Sherborn, Massachusetts [2].