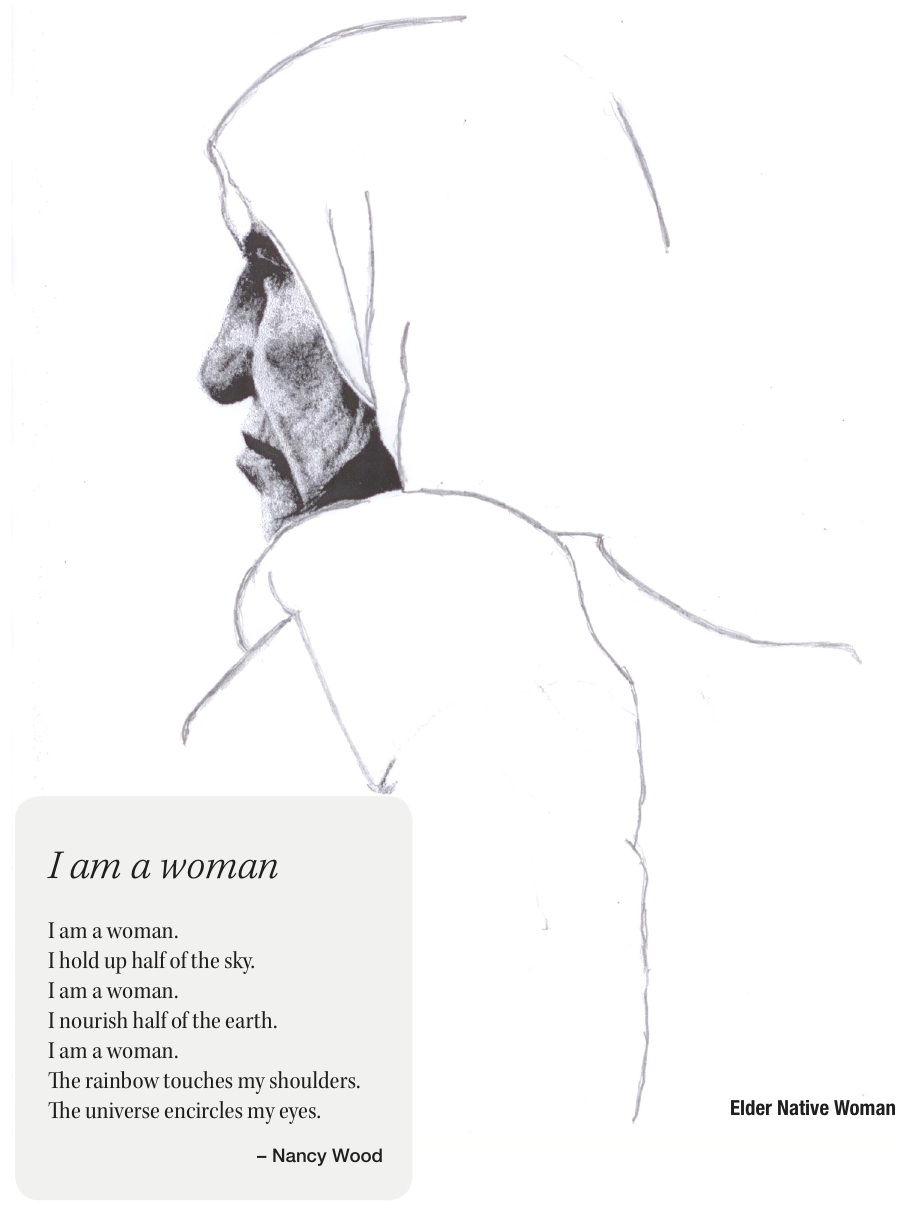 Our country is in rapid political decline.  The sign?  Donald Trump is president and has been leading the decline for seven whole months now.  Eighty percent of the registered Republicans support Trump through his clinical narcissistic horrors.  So we are descending fast.

And where is the hope in such a descent into dangerous political absurdity?  It comes in the form of the counter-sign that is rising in our midst.  I observed it in the Native American women activists who were resisting the Tar Sand oil production in Alberta, Canada when we met them in a Washington, DC protest three years ago.  This past year, I observed this inspired hope when I went to Standing Rock where the Native people were resisting the DAPL (Dakota Access Pipe Line) with nonviolent direct action.

Suzanne and I saw the drama of these two signs clashing in Washington DC last March.  Natives from all over the country came to Washington for a protest throughout the streets of the Capitol as a public witness to celebrate their “rising” stature and to call attention to the legacy of 600 broken treaties throughout their tragic history with the US government.  You could feel the momentum in the streets that day.  Many in this country were finally listening to the wisdom of the First Peoples and beginning to take their lead. The theme of the large gathering evoked the times we were entering: “Native Nations Rising.”

Midway through the procession with drumming and chanting through the streets of DC, we arrived in front of the Trump Hotel.  A group of native peoples paused and pitched a tepee near the front steps of the desecrated land, and, as if in a rite of exorcism, drummed, danced and chanted for 30 minutes.  The clash of images was stunning; its truth explosive.

The tepee physically expressed the counter-sign of life over our demise and death.  The Trump name itself signals decadence.  The hotel is a Temple of Greed, of opulence, a direct representation of the ancestry of White European power and money that has exacted genocide on Native Americans.  In its simplicity, the hand-hewn tepee is the image of challenge to White, political Washington DC, its primeval Native Beauty evokes a noble history, persevering, humble and low to the ground. The drama played out in the streets of Washington is a prophecy delivered by Jesus, warning of the inevitable doom of the powerful: “The last shall be first, and the first shall be last.” (Matt. 20:14)

The historical ascendancy of Native Americans, along with women and people of color is visible; whereas, White supremacists and their money, even with the grotesquerie of Trump’s hold on Washington, are slowly angling downward.

I asked Chief Arvol Looking Horse of Standing Rock, “What do you want to speak about?” for Agape’s 35th Anniversary and annual St. Francis Day celebration.  His response, clear and direct was: “I want to talk about Standing Rock.  We never imagined we would ever be taken that seriously. ..the whole world was watching.”The whole world was watching this Lakota, Dakota, Nakota tribe protect their water, and who would do this better than the Plains Indians.

When I went to Standing Rock last December, I experienced the gathering of tribes of men and women from all over the country, uniting around protecting their water with their lives, risking injury and death.  Something occurred to me while at Standing Rock that I had known in my heart since the origins of the environmental movement decades ago.  There can be no authentic environmental movement without Native Americans leading and animating it.

The thousands of years of Native tradition had held up the sanctity of all life.  The reverence for the world by Native people is woven into the tapestry of their daily lives.  They take their names from the natural world and the animals in the community around and with them; Sitting Bull, Looking Horse, Gentle Hawk, Nest of Snow Owl, Wolf Mother Spirit.  These names of Indian men and women express the oneness of life in their bones and through the bones of their ancestors and ancestral lands.

Our Native sisters and brothers know that we cannot befoul sacred land and water and still survive.  We cannot leak fracked oil from pipelines into our water and soil.  Their truth is their cry: “Mni Wiconi”—“Water is Life.”

The Oceti Sakoin encampment at Standing Rock was a daily discipline on how we can build a movement to “defend the sacred.”  It was grounded in the mystical disciplines.  “Start the day with prayer,” the Elders insisted.  “Take your prayer throughout the day.  When you protect the water in the spirit of nonviolence and you are pepper-sprayed, shot with rubber bullets, hosed with water cannons, ‘stand in your prayer’.”  The Elders consistently reminded us that Oceti Sakoin was a prayer and ceremonial camp to hold a prayerful intention for protecting the sacred waters.

I have often puzzled over these many years of social activism, why we humans are so deeply lost in violence.  My time at Standing Rock illuminated an answer.  We in the modern world are largely security driven and post-modern, in that most of us do not believe in any ultimate truth.  No Divine Plan.  This mindset uncovers the heart of our suffering and violence.  We have lost the sense that all life is one, a sacred web, nurtured and protected by an unarmed Love.

The witness at Stranding Rock was a reclaiming of the sacred with such urgency that the mission called on its participants to risk possible permanent injury and death.  Ancient Rabbinical teachings state that a person, who takes one life, kills the entire world.  That person, who saves one life, saves the whole world.  This “life” extends to soil and water, to animal and human.

At our wonder struck Interfaith Ceremony at Standing Rock, Jesuit priest, Frank Fortier, asked forgiveness from the Native sisters and brothers present, for the oppressive treatment of Indians, especially by Jesuits and Christians.  The Native speakers tended to name “Whites” and “Christians” as the oppressors.  That same day, Father Fortier preached that Jesus was sent by God as a sign of the sacred.  Jesus came to show humans living on earth how to love all creation as a sacred gift from a Loving God.

As Fr. Fortier delivered his homily, I sensed my own outrage that the nonviolent Jesus and his fundamental message of honoring and protecting the sanctity of all life are massacred by a host of self-professed Christians.  This genocidal barbarity finds its origins in the Christian Puritan settlers who had a covenant with God to take what land they found.  For the next 300 years, settlers with the same intent, drove Native peoples from their land, killed them and attempted systematically to destroy their culture from coast to bloody coast.

But on this day at Standing Rock, I felt that Jesus was surely blessing daily the Native community and their water protecting allies throughout the country.  Perhaps, for the first time since 1492, we can begin to write a new chapter for Christians who are reconciled with and forgiven by tribal people.  Is it possible to live together harmoniously, honoring our sacred earth?  Is Jesus not blessing the leadership of Native people who are, at last, leading White Christian people of European descent, out of their own ecological self-destruction?

The present moment is an historic one.  Chief Arvol and the Lakota, Nakota, Dakota people are animating a national movement to resist the oil and gas pipelines throughout the country in defense of our sacred Mother Earth.  They are doing so with nonviolent tactics and spirit.  Native people have never led a national movement in North America with the ethos and methods of nonviolence.  Some activist historians have called the witness at Standing Rock one of the most memorable and significant nonviolent campaigns in American History.

The whole world was watching and took note.  Chief Arvol Looking Horse left all of us gathered at the Interfaith assembly at Oceti Sakowin that cold December day, imploring: “Standing Rock is everywhere.  We must stop all fracking and pipelines throughout this Turtle Island.” All present at the encampment were soon to leave this holy ground and Oceti Sakoin would disband. Our commissioning? Return home, stand in our own prayer and stand against the desecration of our sacred Mother the Earth.  Poem, “I am a woman” by Nancy Wood.