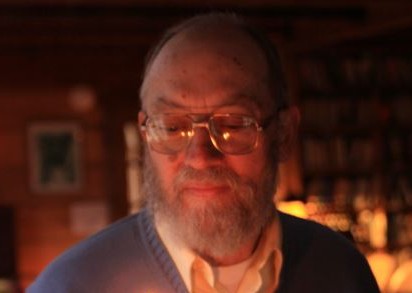 Rich lived three virtues better than any other person I’ve ever known. First, he was a profoundly nonviolent man. I never saw him angry, use harsh language or act with any aggression whatsoever. He was true Ahimsa, Sanskrit for the Hindu principle of non-injury. I’m sure at some point, he may have harmed a fly, but I just can’t imagine it. He was utterly harmless. He did love the nonviolence of the prophets and regularly joined Agape’s nonviolent war protest vigils in Ware.

Because Rich was a local Agape supporter, he was always around, always volunteering for something and never said to me: “Sorry, Brayton, I can’t help you. I’m busy.” I knew that Sabbath Sunday was a church-going, sacred day, inviolable, so I never asked his assistance on the Seventh Day.

The second virtue, was humility, a close friend of Ahimsa. Except for Rich’s passionate statements regarding his love of Agape and his beloved poetry, repeated frequently in numerous settings, he never seemed to “push” any agenda or advance an argument that he felt he had to “win.” In fact, he never “argued.”   For the most part, he was content to just be present, quietly listening, observing. Uniformly, people spoke of Rich as the “kind” one. Rich never was tempted by the word “big”—“big” money, or “big” plans. He always seemed ready to listen quietly, and to serve with a smile. This is why people in emotional, psychological or physical pain found comfort in being near Rich. Rich and our beloved Bob Solari had such a bond as Rich ministered to Bob through the later stages of Bob’s advancing Parkinson’s Disease.

Rich’s third virtue? Mysticism. Rich cared about one thing above all else…promoting mystical ideas, experience and mystical poetry as they were related to nonviolence. Especially as he got older and his homesteading life with his wife, Dottie on their plot of land in a nearby town slowed, he, like the mystics, he became “obsessed” with the sacred. His poetry reflects this Divine Madness.

He grew up a farm boy in Southern Illinois, so it was no surprise that he heard the voice of the Divine in nature, serene and unspoiled. His poetry spoke of a passionate, uninhibited love of the earth and of earth’s non-human creatures, owls, deer, birds with their “eternal song” as he often phrased it.   Such passion, even in poets, is rare.

I often wonder: In the afterlife, where do the mystics end up? Is Rich now listening to that “eternal song” in a high mystical realm?

Referring to Rich’s yearly Francis Day mission of anointing arrivals for the day at the base of Agape’s driveway, a tradition that Rich initiated and carried out for over 15 years, Michael wrote: “He himself was so anointed but not in usual ways. Nature herself had kissed him and marked him out as a special lover. Unction for him flowered from fields, flowed from rivers, was heard in the wind singing in the pine boughs, was caught in beams of sunlight in the dark wood, was received in torrents of rain, was celebrated in birdsong, came tumbling down from cascading waters, came up like crocuses in spring and show up as ripened vegetables in autumn. This glad ointment led him to transcendent places, was indeed the sacrament that from below raised him up, that from a deep soil blessing a homesteader’s mind, quickened, rhyme and reason given, light and strength brought as gift to his farmer/observer’s laboring body.”

We at Agape called Rich Agape’s “Raised Bed Revolutionary” and “Poet in Non-residence” harkening back to Agape’s early gardening days when he helped us construct raised beds for our first Agape gardens. Rich’s love of the arts, especially poetry, was the magic wood that created fire in Rich’s passionate heart and head, as his devotion to the earth, became an inspiration for our initiating Agape’s “Spirituality and the Arts” evenings, which Rich hosted for over 15 years.

In March, we celebrated Rich’s life and faithfulness as affirmer, caretaker, companion and non-stop giver, in whose Holy Presence we prayed hours before he passed, anointing him with holy oil, dying, as we spoke by name of those in the extended community and Mission Council, who were praying for him.

In our final moments with Rich, he held our gaze with his pain-stricken and knowing eyes, though he could not speak, in what we experienced as farewell. We held his hands, remembering that on another visit, while he was still conscious, he whispered in barely audible voice: “You are my family.”    Rich wrote in an earlier essay in Servant Song, that “A poem is a prayer to an invisible altar.” In a chillingly ironic poem, presaging a question he struggled with before his dire diagnosis, he wrote a poem, “Faithful, Eternal Poet, Do You Still Live?” asking in seeming anguish: “Where will the earthly poet live/while words are stone-dead and no rhythmic breath/sustains mortal flesh?” We know in part that Rich’s words are not “stone dead” and that they live one in us, and that the answer to the poet’s cry is Yes, “Faithful, Eternal Poet” you DO still live in us, in our hearts, in our words, some of which are collected here.

Ahmad honored Rich’s concept of the “Invisible Altar” as an “eulogy seeking nobody to be known”… “Needing no audience whatsoever/Except the Invisible/The Ultimate Listener we have realized one day/the only audience who is always right there. …/Waiting for the great poems of time”.  Ahmad observes that such poems are “Like prayers flowing on the Ware River/the Tigris/or any river. …all go to and come from the same Invisible Altar.”