After Images of Historic Protests

Posted on January 24, 2017 Categories: Front Page Comments are off for this post 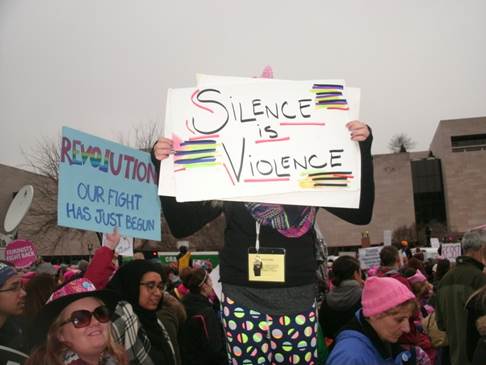 It takes a very good reason to get us to Washington, DC to protest these days.  I do my protesting closer to home in Central Massachusetts.  But for Donald Trump’s inaugural, we just had to be there to stand against this dangerous and tragic farce.

So, down we went for back-to-back protests.  The first was the Answer Coalition’s gathering at the Naval Memorial on 8th Ave and Pennsylvania Ave on the parade route on the day of the Inaugural and the Women’s March the following day.  Back-to-back protests was an historic first.

The two experiences could not have been more different; yet, they were a perfect complement in some ways, united around the strongest conceivable opposition to this catastrophe.

These historic days began at 4:30 am on Inauguration Day.  We trained into DC from the home of our long-time peace friends, Joe Wiehagen and Cathleen Cooney in Cheverly, MD, where we met Steve and Nancy James, Agape co-founders, and spent the night.  The James’ made a ten hour trek from Ashville, North Carolina.

We arrived at the checkpoint before sunrise at 6 am.  The predawn darkness cast a mysterious light on this “dark occasion.”  We lined up with thousands of others of this contrarian stripe who needed to knock back the disbelief of what was about to occur.

It took 90 minutes for two thousand or so of us to make it through airport-style security.  That stranded 5 to 6 thousand folks outside in the pen who would never make it in.  And why?  Secret Service has the legal control to limit unhappy nay sayers on the “happy and peaceful transition of power.”  We understand that ACLU is suing the city of Washington for its blatant violation of the “right to assembly.”

Energy was as high as a kite from the moment we made it through the checkpoint.  It was 7:30 am and the rally was cranking up into full gear.  We gathered around the speaker stage.  The Naval Monument Plaza could accommodate up to 3,000 folks or so.  100 feet from the microphone was Pennsylvania Avenue, lined with military and DC police, grim-faced and standing at “parade rest.”  Ominous body language signals treachery ahead.  We were to spend the next eight hours hanging out with these privileged few who made it in.

Listening intently to 40 or so speeches, ten musicians, drummers and rappers, we were convicted Trump with our chants throughout the day: “Donald Trump get it clear, immigrants are welcome here.”  You would have thought that we would leave this marathon protest, exhausted after 50 or so readings of the “riot act,” but he more we heard of the speakers, the more we chanted, the more bonded we all felt.  We were a precious bunch, as was our “inauguration of resistance” message.

Banners reminded us that this zenophobic, loose cannon misogynist must be Stopped!!!!  Radical left for sure.  Throughout the day, the only one of three white speakers, the Answer Coalition representative gave 8 or so short critiques of the disaster before us.  The three facilitators kept their passions soaring until the end.  The Answer spokesperson and his co-presenters unpacked the immediate threat to women, people of color, LGBTQ folks and illegal immigrants.

The Latino men and women I spoke with at the rally, clearly feared for their people.  Kay, a teenage African-American woman from Georgia, told me:  “I cannot believe what is happening.”  He look was pensive and full of pain.  So, this gathering on Pennsylvania Avenue was an emergency room, first aid of solidarity.

There were some firsts for us.  The first eight hour speaker after speaker rally.  A first of standing and holding our 2’x8’ banner through it all, reading: “Love Trumps Hate.”  We sported the largest banner in the crowd, most placards being 2’x2’, hand held, personal, scrawled truths.  Secret Service limited the size of the banners, wouldn’t you guess.  This crowd was about justice, but those that read our banner, also got a message of love.  Love Trumps Hate was phrase seen throughout both protests and has become a tag line to soften the crudity of this age.

Every two hours, we would see motorcades pas by, the first around 11 am when Trump and his family drove past to a deafening roar of boos, screams and various rage-filled adjectives.  The protest torch of leadership had clearly been passed to the under 40 crowd of very diverse protestors in age, ethnicity and what I will call, “guttural outrage at the system.”

A twenty something had offered to hold our banner for a few hours.  When Trump drove by, this young man and most of the hundreds of his under-40 confreres yelled the “F word” and raised not one, but two, middle fingers!

Steve James gently introduced himself to this young man and said: “We are Christians who hold a sign of nonviolent love.  Please refrain from profanity and middle finger waving, could ya, please?”  The lad was most understanding and refrained from finger and f for a remarkable, remaining three hours.

We really got to know and love one another in this intimate gathering.   Many of the banners were laced with vulgarity.  We were not classic nonviolence here.

Next came the inaugural speeches, prayers and music blasting as loud as you could blare, through gigantic speakers all along Pennsylvania Avenue.  I was immediately overcome with a desperate and trapped sense of a nightmare.

Steve and I proceeded to kneel and pray, just to survive the horror, especially as Trump gave his “address” and Cardinal Dolan “blessed” the occasion in the name of Jesus.  Steve looked over at me and said: “This is the anti-Christ.”

I have not felt so covered in darkness since the moment I heard that Trump won the election.  We were in agreement that we did not come here to the anti-inaugural to “win” but to carry the nonviolent cross of human cruelty.  The language of this crowd did not articulate the Divine, but Jesus seemed ever-present in this cleansing of our national temple and the rancid stench of Trump’s Washington.