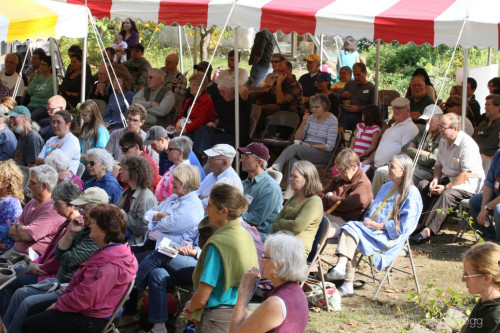 Building and Sustaining Nonviolent Communities: What is Our Future

Michael J. Baxter holds a Ph.D. in Theological Ethics from Duke University, a M.Div. from the University of Notre Dame, and a B.A. from Allegheny College. He was a longtime member of the Department of Theology at the University of Notre Dame and now teaches in the Department of Catholic Studies at DePaul University in Chicago. A co-founder of Catholic Worker houses in Phoenix, Ariz. and South Bend, Ind., Dr. Baxter also served as the national secretary of the Catholic Peace Fellowship.

Jackie Allen and Chris Doucot—co-founders of the Hartford Catholic Worker in Hartford CT.  Christopher J. Doucot is happily married to Jacqueline Allen and the proud father of Micah(17) and Ammon (16). In 1993 Jackie and Chris, along with Brian Kavanagh, founded the Hartford Catholic Worker community and opened St. Martin De Porres House of Hospitality on Clark street in Hartford’s north end. At the Catholic Worker folks from greater Hart- ford gather to practice shalom by seeking right relationships that overcome economic, cultural, generational, gender and racial divides through the personal practice of the Works of Mercy. Chris has participated in nonviolent campaigns for peace and human rights in the U.S., Darfur, Palestine/Israel, Iraq, Chiapas Mexico and Bosnia. He is currently teaching Race,Class and Gender and Religion and Nonviolenceat Central CT State University.

Edgar Hayes and Ann Rader, founders of Freedom Farm Community. Edgar Hayes who is in the Commissioned Lay Pastor program in Hudson River Presbytery and his wife, Ann Rader have nurtured a farm space in Middletown, NY. Working as a bi-racial couple with inner city youth who experience food desserts, this dynamic couple have welcomed inner city youth from NY to their community.During the year churches, young adults, and youth are welcomed to use the space for community building, learning about sustainable agriculture practices, and cultivating peace in individual lives, communities, and the world. Edgar is a former Agape intern and both Edgar and Ann are discerning membership in Agape’s Mission Council.

Music by Chris Nauman and The Midwives of Mystery.

Saint Francis Day in years past.

This annual event honors St. Francis of Assisi, the Patron Saint of ecology, after whom Agape’s main house is named.